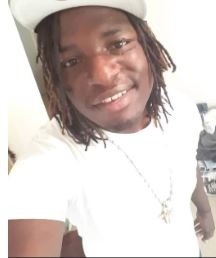 Delmar Cornelius King 33, was born December 31, 1987 in Gadsden, AL. He is the son of Dockress Jean King and Victor Mature Russell.  Delmar went home to be with the Lord on May 4, 2021, after being missing for almost two months from his home in Harrisburg, PA.

Delmar was affectionately known as “Rece Trap” to his close friends. He was educated in the Harrisburg City Public Schools System. He was very creative and received a scholarship for the half day Capital Area School for the Arts Charter School (CASA) He performed in numerous plays, designed, and wrote his own comic book and created a 9/11 memorial picture.  He loved skateboarding, ice skating, inline skating, and played baseball and football as a child.  Delmar was a member of the Emanuel Church of God in Christ under Bishop David M. Screven, where he attended noon day prayer with his grandmother Sis Florine B. Russell, was part of the youth choir Sunday school and numerous church activities. Delmar had a smile that lit up a room. He was not perfect, but he was a good person that so many liked and loved, and for that he will be missed dearly.

Arrangements have been entrusted to Hooper Memorial Home Inc. All COVID-19 restrictions and guidelines will be in place for the service.