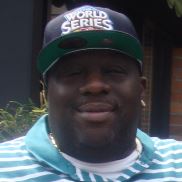 Desmond Vernon Thomas was born April 15, 1967 in New York City. His mother Alice Wyre is from St. Kitts and his father was from St. Thomas. So if you ever wondered where he got that extra spice in his personality, it is because he had Caribbean blood! Desi was a quiet child who was very protective of his two little sisters. He was raised in the Bronx and graduated from Bronx Regional High School. He always loved music and for several years he tried to make it as a rapper. Eventually he gave up on that dream and settled on becoming a part time DJ so he could stay involved with music. Desi was a hard working man and always had a job. He held several certifications for the variety of jobs he worked over the years. However, he always loved electronics and computers. Desi decided to go back to school as an adult.  It was one of his proudest moments when he graduated with an Associates Degree in Computer Systems from YTI Career Institute in York, Pa.

Desi most recently worked for Comcast providing technical assistance for cable customers. He enjoyed this job and worked in the York office at the time of his passing. Although Desi relocated to Pennsylvannia his heart was always in New York. This was evident on every fitted cap he owned, several hooded sweatshirts and his love for the NY Giants who he never gave up on, despite how often they disappointed him!

Desi was an affectionate and loving son, father, grandfather, brother and friend. He had an amazing sense of humor and always made everyone laugh. He had a heart of gold and would do anything for anyone. His giving spirit was both a blessing and a curse. But whether it was reciprocated or not, he always remained in good spirits and never changed who he was or what he stood for.

every breath we take, every move we make, we’ll be missing you.