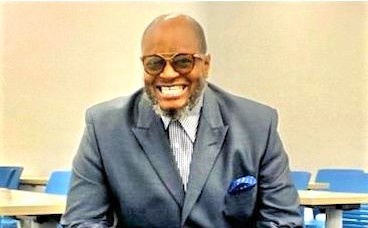 Dr. Scott Shawn Richardson, 52, passed away on August 2nd, 2021 in his home in Houston, Texas. “Scottie”, as he was affectionately known, was born in Harrisburg, Pennsylvania to the late Jeanette and Joseph Richardson. He is survived by  his son, Jordan Scott Richardson; his daughter, JayLa Andrea Jeanette Richardson; his sisters Cheryl Richardson Scott (Thomas Scott) and Melody Tarpley; nieces and nephews, Alonna McClain (Naim McClain Sr.), Trinity Scott, Cohen Scott and Theodore Tarpley; great niece and nephew Naim Jr. and Nura McClain, Alaya and Sky Tarpley, and a host of family members and friends.

He was a proud graduate of Milton Hershey School class of 1987, where he was an avid sportsman in basketball, football, and track and field. Born into a musical family, he loved singing and did so with the school gospel choir, varsity choir as well as creating his own singing group Fellaship. It was there he decided to pursue his passion of music, academics and sports. He loved sports and even coached the women's basketball team at Misericordia University and won a national championship. He went on to play football and basketball during his academic career at Kutztown University.

Dr. Scott earned his Bachelor’s of Arts degree in Music and later his Master’s of Education degree in Curriculum Development and Pedagogy, both from Kutztown University. In 2010, Dr. Scott completed his Doctoral degree in Education Administration and Leadership Studies from Widener University. At the time of his untimely death, he was employed at the University of Houston - Clear Lake as the Chief Diversity & Inclusion Officer and Title IX Coordinator where he served for 3 years. Empowering minority students and university retention with first-generation college students was his passion.

Scottie created success in the music industry as the co-founder of Top Notch Records and released a gold record. He was also one of the founding members of the Beta Kappa chapter of Iota Phi Theta Fraternity, Inc. at Kutztown University and was affectionately nicknamed “Mr. Melody”. He was a free spirit that also enjoyed cigars, camping, fishing and hiking. He could always be found with a quality cigar on hand and a warm, bright smile. Scott made friends wherever he went and his loving soul always left a lasting impression. He was a beloved friend, mentor and lifelong educator who lived a full life. Above all, he loved his children and committed himself to being the best father possible to them.

In lieu of flowers, any love and financial support for his daughters' scholarship fund to ensure she follows her academic pursuits in honor of her father would be appreciated. GoFundMe: WWW.gofundme.com/f/education-fund-for-jayla.