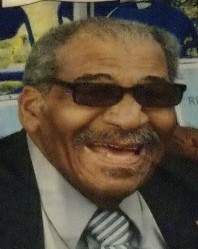 Eartha David Beaty Sr. 93, of Steelton passed peacefully on June 21, 2019. He was born in Portsmouth, Virginia to the late John and Clotell (Hampton) Beaty.

He graduated from I.C. Norcom High School and attended Virginia Union University. He retired from the New Cumberland Army Depot with over 37 years of service as the Director of Maintenance.

David was a faithful and devoted member of The First Baptist Church where he was Deacon Emirates, served as a member of the Charles Donahue Male Chorus, Senior Choir, Trustee Board, Meals-On-Wheels and the former church sexton. He was also a member of Capital Area Music Association and The Senior Citizens Guild. He enjoyed sports especially his trips to North Carolina for the CIAA basketball tournament. He was also an avid Steelton Rollers and Pittsburgh Steelers fan.

David served his county honorably in the United States Marine Corps during WW II. He was a trailblazer as one of the first group of African Americans to enlist in the Corps, known as the Montford Point Marines. He was awarded the Congressional Gold Medal in recognition of his personal sacrifice and service to his country during World War II.

He was very intelligent and dedicated to his work. He received numerous awards including recognition for his outstanding work as an Equal Opportunity Counselor during his employment at New Cumberland Army Depot.

If he was asked how he was doing, his favorite saying was “kicking, but not to high”. He loved his family, friends, church, but most important he loved God.

To order memorial trees or send flowers to the family in memory of Eartha David Beaty Sr., please visit our flower store.