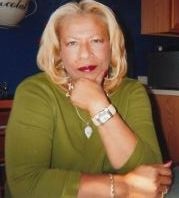 She was born October 15, 1946 in Harrisburg, PA. as the eldest daughter of the late Richard Mack and Janice Burton. She was also predeceased by her siblings Steven Crummel Jr. and Shirley Mae Mack.

Elayne was a 1964 graduate of Bishop McDevitt High School, where she continued to serve her Catholic faith that began as a child in St. Francis of Assisi Elementary School.

For the next 14 years, Elayne did a myriad of things like continue her studies at Penn State (York campus) and secure employment with the State Department of PA.

In 1978, she drove cross country (with her then 12 year old daughter and her cat) from Harrisburg to Los Angeles in search of an environment that could (and did) meet all her whims and wishes for her and her child to have a rich life full of adventures and excitement.

For the next 20 plus years, Elayne took L.A. up on all it had to offer from studies at El Camino and West Los Angeles Colleges to a career at Hughes Aircraft (now Boeing) where she worked amongst the elite in the Engineering aircraft industry such as the late Astronaut Gregory Jarvis of the Space Shuttle Challenger.

It was not unusual to find her on Venice Beach roller skating, socializing with friends at the Playboy Jazz Festival or spending the day with her daughter traveling, shopping or spontaneously doing something that struck her fancy that day. She even taped an episode of the show The Love Connection that aired in the mid eighties on a dare that her daughter posed. (No. It was NOT a love connection)

She met George Batts Jr. her husband of 26 years in Los Angeles and they were married on December 12, 1992 in Las Vegas, Nevada. A few years later they moved to the East coast and spent time in the Baltimore/Maryland/Washington D.C. area before heading South to Charlotte North Carolina, Columbia South Carolina and lastly Atlanta Georgia.

By now, rollerskates and beach excursions were replaced with cruises, weekend road trips and jaunts to the nursery to get plants and flowers for the backyard with her husband. Her only Grandson (Jaylen) was born in Charlotte in 1996 and immediately they were inseparable. She often referred to him as, “her baby by a surrogate.” They had a special bond, exclusive to them but common between Grandparents and Grandchild.

Elayne had many hobbies and past times. She liked many things. An original Trekkie, she loved Science Fiction. The outdoors amongst nature was one of her favorite places to be; fashion and home décor always had a strong presence in her life. Elayne was strong and secure in her love for her family and the Lord. Her spiritual upbringing and commitment resonated in all she did and was a driving force for her beliefs and behavior. She lived out loud and unapologetically, took nothing for granted and was happy traveling the world or at home watching television on a rainy day. She was the epitome of class and dignity and her light will always shine bright.

“Life is not measured by the number of breaths we take, but by the moments in life that take our breath away.”

To order memorial trees or send flowers to the family in memory of Elayne Batts, please visit our flower store.