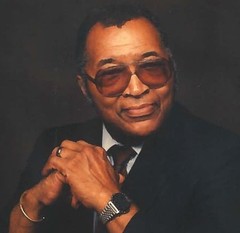 Dr. John Christopher Jr. entered Eternal Rest on Wednesday August 16, 2017.
He was born August 5, 1931 in Cleveland, Ohio to John Henry Christopher and Cora Snipes Christopher. He developed a love for the sport of boxing in his youth, and was quite successful as a boxer, winning Golden Gloves Tournaments and other bouts. He was a 1949 graduate of Glenville High School in Cleveland Ohio.
He was drafted into the US Army in 1952, and did his basic training at Fort Indiantown Gap. He then served in Austria during the Korean War, where he was assigned to chauffeur the General, and he assisted in the training of the US Boxing Team. After an Honorable Discharge from the US Army, he was afforded the opportunity to attend college at Central State University in Wilberforce, Ohio on the GI Bill. It was there that he met the love of his life, Betty Jo Carter Christopher of Columbus, Ohio. After they both graduated in June of 1958, they were married on August 1,1958 and spent the next 40 years having children, raising their family, and making a wonderful life together, He was a loving, devoted husband until her death in 1998.
After graduating from college, John and Betty took teaching jobs in Cleveland, and John spent the next 15 years in the East Cleveland School District. He began teaching at Hazeldell Elementary and was quickly promoted to the title of Assistant Prin-cipal and Home/School Liaison and Guidance Counselor at Kirk Jr. High School. He then took a position as Assistant Superin-tendent and Director of Pupil Personnel until 1973. During this time, he also earned a Masterâ€™s Degree from Case Western Reserve University in Cleveland, Ohio.
In 1973, John was offered a prominent position with the Commonwealth of Pennsylvania to work in their Department of Edu-cation. He served as a Bureau Chief. His first role was to oversee all of the public libraries in the state. He then moved on to directing the growth and development of Adult Basic Education programs in the Commonwealth. He received many awards and commendations for his work in promoting GED and literacy programs for adults throughout the state. Many of his efforts were concentrated in depressed areas where factory work had declined, and he helped empower people to find new careers and employment through the achievement of their GED. John ended his career in education as the Assistant to the Deputy Secretary of Education for the state of PA, until his retirement in 1993. During his years with the Commonwealth he also earned his Doc-torate Degree in Education from Nova University.
John was a 3rd Degree Prince Hall Mason in Cleveland, Ohio. He also was very active in his fraternity, Omega Psi Phi from his induction at Central State in 1956 until the end. He was actively involved in his fraternity and held many offices over the years. He was awarded the Omega Man of the Year in Cleveland Ohio, and was honored in PA for his years of service to his fraterni-ty, for over 60 years.
John's other passions were his love for boxing, and he served as an official in the capacity of Referee, Judge, Timekeeper or any other role that required his years of experience. He did this in OH and PA, and had a life-long love of the sport and was given the opportunity to help out as an Official for the US Olympic Trials in Colorado Springs, CO. John was also honored by the Golden Gloves Association.
John was an amateur wine maker. And there was lots of it over the years. He introduced this hobby to some of his friends, and they shared time making their own wine and coming up with fun names. One of his most popular bathes was named â€œSweet Betty Booâ€ for his wife. He loved sharing his wine with others, and there are many stories revolving around wine making and drinking in John's basement wine cellar.
During the developmental years of his children, he was busy traveling all around the state of PA, but he managed to stay in-volved with his children's sports and recreational activities. He was there for his children, attending games, and concerts, and events in support of their passions. And always made sure his presence was felt in his community. He served a term as Presi-dent of the Hershey Youth Football Association and volunteered his time as a game announcer.
John was a spiritual man, and found quiet ways to serve God. He attended Catholic Elementary school for some time, and was raised in a Baptist Church. After getting married, he became a Deacon at St. Phillip's Lutheran Church in Cleveland, OH; and he was also an Elder at Capital Presbyterian Church in Harrisburg, PA.
John was a loving father, grandfather and friend until the end. Although he spent the last years of his life in nursing care, the staff and other resident would comment on how kind and gentlemanly he was.
John was pre-deceased by his wife of 40 years Betty Jo, and is survived by 4 children, Evelyn Dobson (Chester), John C. Chris-topher III (Kathy), Jocelyn Christopher Paige (Dale), and Judson Christopher (Tamra). Additionally, he had 12 grandchildren, 5 great-grandchildren, 1 nephew ,2 great-nieces, 1 great-nephew, and numerous other cousins, and dear, dear friends.