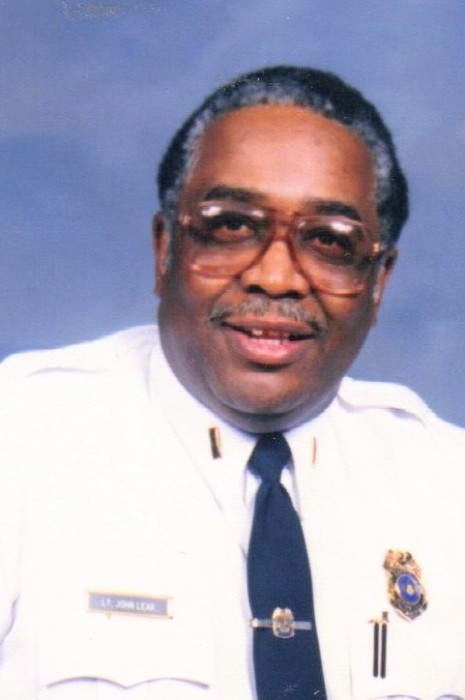 He graduated from Dunbar Senior High School in 1956.  Following graduation, he enlisted in the U. S. Navy (1956-1966).  John received an Honorable Discharge and was awarded the Good Conduct (2) and National Defense Medals.

John began his career in law enforcement in 1974 as a Campus Police Officer at Carnegie Mellon University.  In 1975, he became a Commonwealth of Pennsylvania employee with the Capitol Police.  He also served as Assistant Chief of Police for both Mansfield and East Stroudsburg University Police Departments.  Lieutenant Leak retired in 1998 with twenty-eight years of dedicated service.

He was an active and faithful member of the Baptist Fellowship Church where he sang in the choir.  John loved the Lord and was passionate about his church and the choir.

John was committed to public service.  He played an active role in the community.  He enjoyed working with the youth, college students and young adults, often seeking and providing scholarships to high school students within the Harrisburg area.  John served as a mentor for the Dauphin County Veterans Court Program.  He was a member of the Fraternal Order of Police, State Capitol Lodge #85; American Legion Post #733; East Hill Pitt Club of Pittsburgh where he was a life member and former president; a Charter member of the Monroe County Chief of Police Association; a Lifetime and Charter member of Phi Beta Sigma Fraternity, Inc., Theta Omicron Sigma Chapter of Harrisburg, PA.; National Organization of Black Law Enforcement Executives (NOBLE); Chosen Friends Lodge #43, Masonic Order 33 Degree; and a Lifetime member of the Veterans of Foreign Wars.

He received several awards from various organizations including the Black Action Award from the University of Pittsburgh; U. S. Navy Commendations; NOBLE of Central PA; Phi Beta Sigma Fraternity, Inc.; Zeta Phi Beta Sorority, Inc.; and Letters of Commendations from the Commonwealth of PA, Department of General Services.