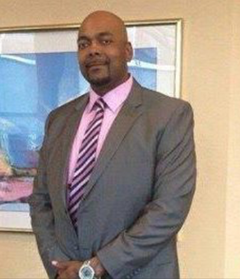 Lamar Antjuane Banks â€œMar-Marâ€, 39, of North 15th Street, Harrisburg, completed his earthly journey on Monday, February 2, 2015 in the Harrisburg Hospital. He was employed with Bright Futures Learning Centers Inc., as well as owned his own Physical Fitness business. He was a 1993 graduate from Bishop McDevitt High School and a 1997 Delaware State University graduate. He was a lifelong member of the St. Stephens Episcopal Church. He was preceded in death by his mentor and loving grandfather, George M. Banks and grandmother, Sallie Ray Banks. Surviving are his parents, Denise R. and Gregory B. Williams Sr., of Harrisburg, his 3 children, Jordan Thornton-Banks, Taylor Banks and Kortez Banks. Two sisters, Lakeisha R. Williams and Shayla M. Mitchell (Michael), of Harrisburg, a brother, Gregory B. Williams Jr., of Harrisburg, his companion Melissa of Camp Hill, his Aunts and Uncles, Gina and Scott Barkley of Harrisburg, Uncle Dred Scott of Maryland, Chevette, Kenneth, Ira and Calvert, his grandparents, Edward and Bernice Williams, of Steelton and host of other aunts, uncles, nieces, nephews, friends, frat brothers and relatives.

To order memorial trees or send flowers to the family in memory of Lamar A. Banks, please visit our flower store.