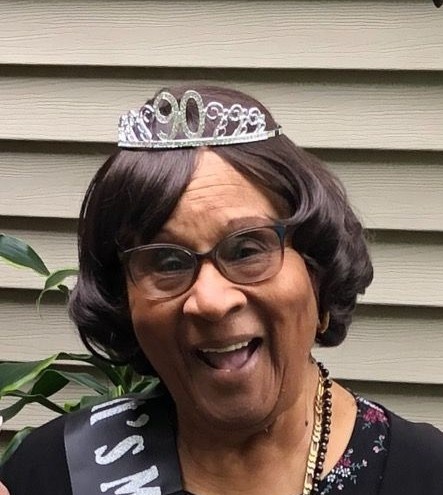 On February 12, 2022 God went into His garden and picked a rose, Ms. Lily Seaton Black, who departed this life at home surrounded by family and friends. She was born and raised in Baltimore, Maryland, to the late William J. Seaton and Sarah Elsie Seaton. Preceding her in death was her husband Arthur Lee Black, Sr., and son Arthur Lee, Jr.

Lily attended New Shiloh Baptist Church and accepted Christ at an early age. She graduated from Frederick Douglas High School in 1949. After high school, Lily attended Provident Hospital and Morgan State College, studying nursing. In 1951, she relocated to Philadelphia, Pennsylvania, where she was employed at the Frankford Arsenal, making war shells. She also attended classes at the Community College of Philadelphia, earning an associate degree in Social Services.

On March 22, 1953. Lily was united in marriage to the late Arthur L. Black. Four beautiful children were born to this union, three sons and one daughter. As a mother and housewife, Lily was very active in her community as a Den Mother to the Cub Scouts and a coordinator for the Neighborhood Youth Program. Youth gathered at her home to play pool, jump rope, and practice band. Lily also invited and took neighborhood children to the church where she taught Sunday School. She was an active, faithful member of Wayland Memorial Baptist Church and Sharon Baptist Church in Philadelphia.

Lily re-entered the working world when her youngest child started school. However, in 1973 she was diagnosed with cancer and left work due to her illness. After treatment and lots of prayers from family and friends, her cancer went into remission.

In 1975 Lily served as a volunteer at Misericordia Hospital. She truly fitted the cliché, "When you become a part of something, it becomes a part of you." Lily eventually became the Director of Volunteer Services until her retirement at age 68. In her tenure as the Director, Lily touched many people's lives. She made volunteer services an essential department with over 100 active volunteers. She was also recognized by the South Eastern Pennsylvania Area Black Nurses Association for her work in the community. Ms. Lily also started an enrichment Summer Youth Employee Program and served on several Boards, Auxiliaries, and outreach programs in the Community.

Lily relocated to Harrisburg, Pennsylvania, in 2005 and shortly afterward joined The Greater Zion Missionary Baptist Church. Lily served as a faithful member of the homeless ministry and unofficial transportation monitor for Sunday van services. She also volunteered at Compassionate Care Hospice and was an active member of Gold’s Gym. Mother Black, GG, Ms. Lil, Mom-Mom, as referred to by many of her adoptive children, was loved by all and will be greatly missed. Now she has gone to get her reward.

Social distancing and wearing of mask are required, even if fully vaccinated.

To order memorial trees or send flowers to the family in memory of Lily S. Black, please visit our flower store.