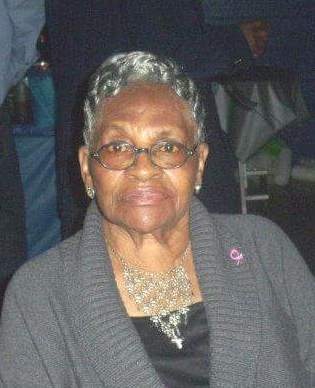 Mattie Lee Kates was born to the late Carlisle and Beatrice Lockett on June 15, 1931 in Boiling Springs, North Carolina.  She was preceded in death by her daughters Evonne McDowell, Delores McDowell, her sisters Lula Mae Lockett, Minnie Sue Watson and her brothers James Lockett and Donald Lockett.  She was the 2nd of eight children.

Mattie L. Kates was born and raised in North Carolina were she attended Green Bethel School.  She moved to Harrisburg, Pennsylvania in the 70’s.  Soon after, Mattie began working for Harrisburg Hospital where she later retired in the early 2000’s.

Mattie was a long time member of the First Spirit Filled Baptist church where she served as the Mother of the church and on the Usher board.  On October 29, 2016 Mother Mattie Kates was blessed to be celebrated by her church family for her contributions and years of service to the church.  Mother Kates enjoyed attending Sunday school and church services every Sunday.

She leaves to cherish her memories her sons; Kenneth McDowell, Jerry McDowell and Ricky McDowell, her sisters Lola Gentry, and Dorothy Woods, her brother John Lockett her best friend Willie Mae her grandchildren, great-grandchildren, nieces, nephews and a host of family and friends.

To order memorial trees or send flowers to the family in memory of Mattie L. Kates, please visit our flower store.