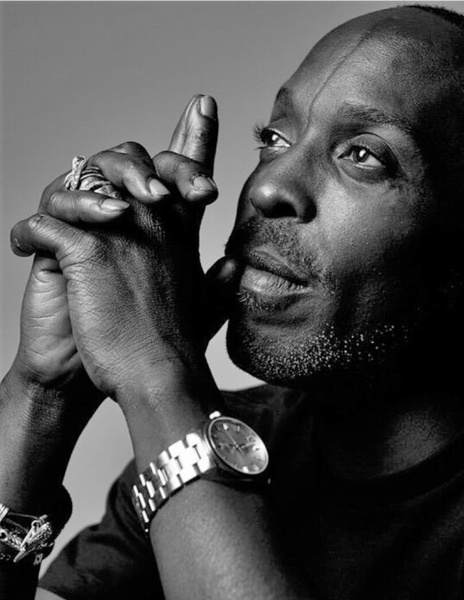 Michael Kenneth Williams will always be one of television’s most respected and acclaimed actors. By bringing complicated and charismatic characters to life—often with surprising tenderness—Williams established himself as a gifted and versatile performer with a unique ability to mesmerize audiences with his stunning character portrayals.

Born and raised in the East Flatbush neighborhood of Brooklyn, New York, Williams grew up in the Vanderveer Estates housing complex now known as Flatbush Gardens and was educated in the New York City public school system. Williams began his career as a performer by dancing professionally at age 22. After numerous appearances in music videos including Crystal Waters’ hit single “100% Pure Love” and as a background dancer on concert tours for Madonna and George Michael, Williams decided to seriously pursue acting. He participated in several productions of the La MaMA Experimental Theatre, the prestigious National Black Theatre Company and the Theater for a New Generation directed by Mel Williams.

At 25 years old, Williams got the scar that became his signature physical feature. He was spending his birthday at a bar in Queens when a man slashed his face with a razor blade during a fight. Soon after he landed his first feature film when he caught the eye of the rapper Tupac Shakur. Shakur saw a Polaroid photo of him in a production office and decided that Williams was the only person who could play his brother in the 1996 film “Bullet,” which also starred Shakur and Mickey Rourke.

After playing a drug dealer in Martin Scorsese’s 1999 film “Bringing Out the Dead,” Williams landed a small role in an episode of “The Sopranos,” playing a loving father living in the projects who agrees to help hide a son of a deceased mafia boss. With that job, he felt as if he had arrived as an actor, he told Vanity Fair in an interview last year. It wasn’t lost on him that he was one of the few people of color on the show, he said, and that typically those characters ended up “floating with the fishes.” But he viewed it as monumental that he had played a Black man on the show who was not a “pawn that got killed off.”

Williams is best known for his remarkable work as ‘Omar Little’ on “The Wire” David Simon’s five-season epic on HBO that explored the gritty underworld of corruption, and the police in Baltimore. The wit and humor that Williams brought to Omar, the whistle-happy, profanity-averse, drug dealer-robbing stickup man, earned him high praise and made Omar one of television’s most memorable characters. As a swaggering lone wolf in a story largely defined by continuing battles between the police and various crime bosses and crews, Omar was one of primetime’s pre-eminent antiheroes in a TV era defined by them. He was also gay and openly so in the homophobic, coldblooded world of murder, a groundbreaking portrayal of Black masculinity on television.

Williams appeared in a number of films, including “Gone Baby Gone”, “The Road”, “Brooklyn’s Finest”, “RoboCop”, “The Purge: Anarchy”, “Kill The Messenger”, “The Gambler”, “Ghostbusters”, Assassin’s Creed”, “The Public” and the Oscar winning “12 Years a Slave.” He had recently been cast in “Heart of a Lion” a biopic of George Foreman. He was set to portray Doc Broadus, the famed boxer’s mentor and trainer.

He has received 5 Emmy Award nominations, including one this year in the category of Outstanding Supporting Actor in a Drama Series, for his portrayal of Montrose Freeman on the HBO show “Lovecraft Country.” The Primetime Emmy Awards will be presented later this month on Sunday, September 19th.

Williams was previously nominated for Outstanding Supporting Actor in a Limited Series for his work on Ava Duvernay’s “When They See Us.” Additionally, he received Emmy nominations for Outstanding Supporting Actor in a Limited Series or a Movie for HBO’s “Bessie,” and for Outstanding Supporting Actor in a Limited Series for his role in HBO’s “The Night Of.” Michael also received a nomination as a producer in the category of Outstanding Informational Series or Special for his work on the 6th season of HBO’s news program “Vice” which opened with an extended special season premiere featuring Williams as he embarked on a personal journey to expose the root of the American mass incarceration crisis: the juvenile justice system.  “Raised in the System” offered a frank and unflinching look at those caught up the system, exploring why the country’s mass incarceration problem cannot be fixed without first addressing the juvenile justice problem. Williams investigates the solutions local communities are employing that are resulting in drastic drops in both crime and incarceration.

Williams continued his work with Vice, playing the part of investigative journalist and executive producer for “Black Market,” a documentary series that exposes and comments on illegal markets throughout the world with a focus on the people involved and connecting with them on a human level.  “Black Market” was a flagship show for Vice when they launched the VICELAND Network. A second season is currently in post-production and will be released in 2022.

On and off screen, Mr. Williams engaged in discussions about systemic racism amid the Black Lives Matter movement. He plied the legacy of America’s history of racism as he studied for his roles.

Off-camera, Williams was best known as an activist and community leader in Brooklyn and beyond. Engaging directly with local organizations, politicians, youth, and officers, Williams was a catalyst for social justice movements. He was a constant presence in Vanderveer and worked tirelessly to advocate for new solutions and positive change. Williams established Making Kids Win in 2017, a charitable foundation whose primary objective is to support grassroots organizations and ultimately house them in the Making Kids Win Community Center. He also worked closely with NYC Together, an organization that works to empower youth and build police-community relations through innovative strategies. In 2020, he co-founded Crew Count and We Build The Block – movements that empower local communities and advocated for public safety reform through voter registration and political action. Williams' community work reached far beyond Brooklyn- he worked with Advance Peace in Oakland, CA, City Weeds & For My Kids in Baltimore, We March On in Atlanta, and the Innocence Project in Ohio to name a few.

Williams also used his celebrity status to promote several causes, most notably criminal justice reform, both in the United States and in the Bahamas. Williams served as the ACLUs ambassador of Smart Justice, in a fight to end mass incarceration and was a board member for Urban Arts Partnership.

This is the link for the St Stephen's Cathedral Facebook page, where the livestream will run beginning at 10 am tomorrow (or whenever the service begins). One need not be a member of Facebook to watch the livestream.

To order memorial trees or send flowers to the family in memory of Michael Williams, please visit our flower store.