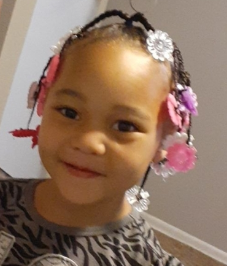 Noraa was born in Harrisburg on January 12th, 2017, and to be starting preschool soon Noraa was soo excited. She loved to paint and draw with her chalk; she drew her family a lot. Another one of her faves was to play dress up. Whenever she got new clothes, she had to try on every piece and come out to show everyone, then she would need a picture to be taken. Anything with colors and glitter was a must for Noraa. JoJo siwa was also an all-time fave of hers. She would dance in front of the TV to all her songs, while painting her nails! She was an absolute diva!

Noraa knew she was becoming a big girl but also knew she was Daddy's baby girl. She was so smart; she was getting really close to learning how to tie her shoes.  She would say "We have to wrap the bunny ears around!” when someone would help her tie her shoes. She loved her Twinkle Toes shoes in her favorite color; was rainbow and whenever someone asked what her favorite color was, she named them all. She was pretty close to learning how to swim and she would hold onto the walls and scream “look look I'm swimming!”. She even found a way to be helpful while at the pool, she would lay a towel down for her little cousin and cover them up with another towel so they would not get cold. She cared for everyone. She would wait for her mom to finish getting dressed in the morning just to tell her that she was beautiful.

Noraa grew a beautiful relationship with everyone she spent time with. She had an unbreakable bond with her Nana Yvette. During the year her family stayed in Kansas she would phone, and video call her Nana. Who would stay on the phone with her forever as Noraa would talk to her about her day and about when she wanted to see her. She always asked if she could come and get her real quick not understanding how far away we were. When she finally did get to Nana's house, man was she in Heaven. There was not a thing Noraa could not get from Nana, from babies to Candy, and anything was possible when Nana was around. If she was ever told no and Nana was around she would tell on the person so her Nana could ask her “You want me to beat them?”, Noraa would smile and shake her head yes. The only ones she would say no to a beating would be her sibling but if she were the one getting in trouble, she would throw them right under the bus. Whenever her mother would ask “did you do this?” she would look down and say “no”, but her mom would ask knowing it was Noraa. Then Noraa would always say “Baya!” You would then hear Nevaeh in the background yelling “nah uh” while Noraa takes off running. I guess she always would feel bad because she would always go to someone after tattling and say, “Baya want to give me a hug.” That is one thing Noraa’s mother said, “she always wants people to forgive.”

Nora also grew up to have a strong bond with our uncle Jerk Jonae and their children. When she moved to Kansas last year, she asked all the time “can I go to Uncle Jerks house to play with the kids later?”. When she finally did come back to PA as soon as she saw her Nana the first person she would ask for; Uncle Jerk. Another strong bond she had was with her Pop-Pop. Whenever she would go to Pop-Pop Sheldon's she would want to touch everything. All you would hear is “what is this and what is this?”, I guess she loved to ask him questions because he always made time to explain to her what something was, what it did, and if it was safe he would always let her play with it. Her mom caught her with a set of binoculars once and told her to put them away, Pop-Pop overheard and yelled “she is fine! and leave Yaya alone”. Yaya: was the name he had gave her; meaning Thursday which was the day she was born.

Noraa is survived by her parents; Chymiere Taylor and Aaron Wilson. Her siblings; Aaron Jr. and Arianna Wilson, Tatiyana, Justen, Jumere, Chayne, and Nevaeh McQuay. Grandparents; Sheldon and Janean Wilson and Yvette and Tyrone Brunelle. Aunts; Jae'chelle Wilson, Tiara Varner Leah and Riketa Taylor. Uncles; Bryan Taylor, Tyrone Brunelle, Sheldon, and Darren Wilson and in addition, in her heart and her own words Uncle Potts, Uncle Reem and Uncle Jerk. Great-grandparents Herman Thompson, Great-grand mother Janie, Grandpa RP and Sharon Madden. Great-Uncle’s; Sean Madden, Ron-Ron, Charles, Harry, and Jonathan. Her uncle Sean love calling her his little China doll and her Uncle Eddie always went to great Lengths to make her smile and had a good deal with contributing to her fashion style. Great Aunts; Rhonda Porter Michelle, Gina, Tami Bunnell, Suella Cobert, Mandy and Kia. Cousins; Bear-Bear Karson Adanna, Sheldon III, DJ, all of Uncle Jerks kids and a list of family and friends from the East to the West Coast. Now in her forever home, she will be joining a host of family members such as her Papa Bryan Taylor, Great-grandmother Louis Taylor and Beatrice Colbert. Her Uncle OneSev and lastly her great uncle Jimmy who went along to keep her company just a few days later.

Noraa will be remembered and celebrated on June 25, 2021, at Hooper Memorial Home, Inc. Visitation at 10:00 a.m. Memorial Service starting at 11:00 a.m. Live streaming available for the service at www.hooperfuneral.com