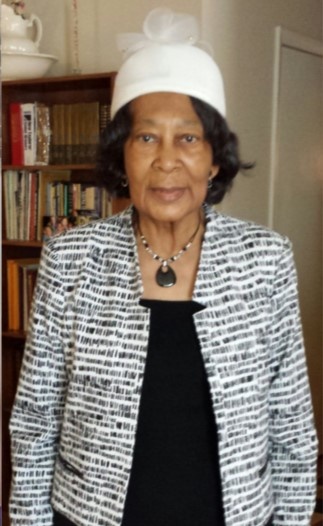 Mother Parthenia Bigelow Brown was born on March 3, 1937, in Alamance County, North Carolina to Joseph Cephas Bigelow and Lessie Jane Faucette-Bigelow.  She was the fourth child of six children.  As a child, she was a member of Lee's Chapel Baptist Church where she sang on the choir and an ushered. After her family moved into the city of Burlington N.C. she was a member of Morning Star Baptist Church, where she joined the choir and served on other committees.

In 1956 she personally committed   her life to Christ at Mount Nebo Holiness Church of God of America.  While attending Mount Nebo for about a year, she met Richard Lee Brown.  They married in March of 1957 and traveled to Germany where they lived for a brief period.  After returning to the states, she and her husband traveled all over the United States as Evangelists. As they traveled and ministered, to their union seven children were born in various states across the country: Richard Anthony (Philadelphia, PA), Micah Aaron (Tallahassee, FL), Angelia L. (Burlington, N.C.), Leila Patreece (Long Island, N.Y.), Samuel Marcus (Detroit, MI) (deceased), and Christopher Ivan (Rochester, N.Y. and Regina Kay (Chapel Hill, N.C.)

After many years of traveling on the mission field, Mother Parthenia Brown and her family settled in Harrisburg, Pennsylvania.  Where she became a member of Lingo Memorial Church of God in Christ, serving under Reverend Joseph Bass and later on under the Late Bishop Benjamin J. Ravenel.  She worked faithfully in ministry by transporting members to the church services and children to Sunday school, served as the President of the Youth Department, Director of the children's choir, served in the kitchen with Mother Estelle Kendall and Mother Ezelle Ellison. She was also a ministry companion and assistant to the late State Mother Ruth White.  She also served as President of the Evangelist Department, a Harrisburg District Consecration Service President, Prayer Warrior and a member of the Mother’s Board.

Parthenia worked in the Medical Field for 30 plus years.  She started as a Dietary Aide in the hospital, then transitioned to a Nurse’s Assistant for many years in hospitals, nursing homes, Private Duty Nursing.  She was an accomplished baker creating wedding cakes, as well as a wide assortment of other cakes and desserts.  For some time she sold her renowned pound cake and other home-baked goods at the Broad Street Market in Harrisburg.

She loved to bake, not just for business but for friends, loved ones, neighbors and strangers alike.  She also loved the children in her neighborhood as she threw an annual summer party for them, with grilled food, baked goods, and drinks.  She also loved to share Christ with her neighbors, resulting in many giving their lives to Christ.  She shared her faith, her love, her food, her plants, her home and anything she had to offer to those in need.

To order memorial trees or send flowers to the family in memory of Parthenia B. Brown, please visit our flower store.