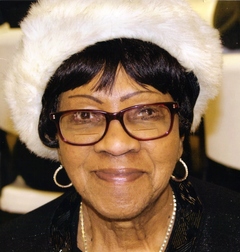 Pearl Lee Brandon Owens was born April 28, 1926 in Mount Union, PA. She was the youngest of seven siblings to the late Samuel Brandon and Susie Mitchell Brandon. She received her formal education in the Mount Union Public Schools. Pearl moved to Harrisburg in 1945. She married the late William Owens Sr. During her working career, she was employed by Hockenberry Nursing Home, then later obtained a position as a Nurses Aid at Harrisburg Hospital. She also was an employee of the Commonwealth of PA where she retired after 25 years of service in 1992. Later she accepted a part-time position with Leeâ€™s Industries as an office administrator. Pearl was a faithful servant of the Lord. She attended Mt. Calvary Church of God In Christ under the leadership of Elder D. R. Gilmore. She served on the Usher Board for 39 years and was also a member of the Senior Choir. In her leisure time, Pearl enjoyed spending time with her family, traveling to the Church of God In Christ Holy Convocation in Memphis, TN, and St. Louis MO, shopping, and tuning into her favorite television programs, Jimmy Swaggaert, the Word Channel, Family Feud and Golden Girls. Pearl was a God fearing woman who loved the Lord, family and friends and was indeed a true woman of God. Pearl transitioned into eternal life on Friday, July 14, 2017. In addition to her parents she is preceded in death by seven siblings, her husband William Owens Sr, and leaves to celebrate her life five children, her daughter Marjorie Wiley (Maxie) of Harrisburg, PA; her son William Owens Jr. ( Cheryl) of Wilkes-Barre, PA ; her son Ralph Owens of Harrisburg, PA; her son Robert Owens (Patrice) of Harrisburg, PA, daughter Toya Cartlidge (Kenneth) of Harrisburg, PA; seven grandchildren, eleven great grandchildren, four great great grandchildren; her lifelong cousin and spiritual sister Bessie Bethea as well as cousin Mary Alice Straiter of Danville, VA and a host of nieces, nephews, other relatives, church family and friends.