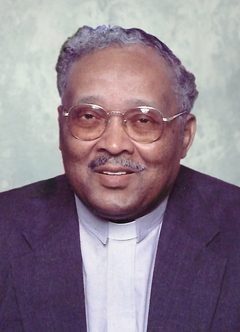 Reverend Doctor Robert Allen Brown, Sr.
The Reverend Dr. Robert Allen Brown, Sr., 77, of Harrisburg, entered into eternal rest on Wednesday, April 19, 2017, peacefully at home surrounded by his loving family.  He was married to Romaine Elizabeth (Pollard) Brown for 58 years.
Reverend Brown was born August 14, 1939 in Harrisburg, the son of the late Joseph William and Marion (Harden) Brown. He was a graduate of the old William Penn High School, Harrisburg.  Upon graduation in 1958, he began his first career in the U.S. Army and retired after 21 years of active duty.  In that time, he served in Germany, Vietnam, Okinawa, Panama and various stateside posts.  Of special significance, he was a member of the U.S. Army Special Forces during the Vietnam Conflict. As a result of this valorous service, he was re-called to active duty during Desert Storm in 1991.  In his career, he was honored with a Silver Star, Bronze Star with Valor, Republic of Vietnam Gallantry Cross with Palm, Meritorious Service Medal, Master Parachutist Badge, Combat Infantry Badge and Pathfinderâ€™s Badge.  In 1996, he retired from his second career with the Commonwealth of Pennsylvania, Dept. of Transportation, where he served as Chief of the Disadvantaged Business Enterprises, Supportive Services Division.
Reverend Brown received his first degree from the University of New York, in 1978. He received his Bachelors in Business Administration from Pennsylvania State University in 1981. He then went on to obtain a Master of Arts, in 1999 and a Master of Divinity in 2001 from Lancaster Theological Seminary.  He obtained a Doctorate of Arts in Theology and Biblical Counseling in 2011.
He was a former member of St. Paulâ€™s Episcopal Church, Harrisburg.   He served at Harris Street UMC, Harrisburg, and Calvary UMC, Harrisburg, 1997 â€“ 1998.  Reverend Brown served as pastor at Riverside UMC, Harrisburg, from 1998 â€“ 2000; Newton-Hamilton UMC Charge:  (Newton Hamilton UMC, Atkinson Mills UMC, Ryde UMC,) from 2001 â€“ 2005; Wesley UMC, Middletown PA, 2005 â€“ 2008.
Reverend Brown retired in 2008 from his third career as an Ordained Elder in the Susquehanna Conference of the United Methodist Church.   At the time of his passing, he was a member of Cross Point UMC, Harrisburg.
He was a proud member of Chi Rho Singers, The Order of St. Luke, Kappa Omega Chapter of Omega Psi Phi Fraternity, Dauphin County Veterans Court, Central PA Literacy Council, Pennsylvania State University Choir, and Harrisburg Choral Society. He was a life time member of American Legion Post 733, VFW Chapter 3540, PA-VFW Chapter 1718, and Disabled American Veterans 4478.
In addition to his wife, Romaine, he is survived by his 9 children: Stacy Scott, husband of Elizabeth; Delores Ritzman, wife of Joseph; Robert Brown Jr., husband of Maria; Angela Brown, Leonard Brown, husband of Theresa;  Paula Adams; April Brown; Wyonella Brenneman, wife of Jamie; Donna Taylor-Tillet, wife of Trevor; 22 grandchildren and 10 great-grandchildren.  He is also survived by two sisters, Linda Brown-Williams, and Denise Alaâ€™ilima.  He was blessed with a host of family and friends.  He is preceded in death by his brothers Donald Brown, William Brown, and Joseph Brown.
A service of celebration will be held on Tuesday, April 25, 2017, at Cross Point United Methodist Church, 430 Colonial Road Harrisburg.  Visitation begins at 9:00 AM, service will commence at 11:00 AM.  Officiating will be Harrisburg District Superintendent Reverend Barry Robison.  Burial will be at Fort Indiantown Gap at 2:00 PM.
Memorial gifts may be made in honor of Reverend Doctor Robert A. Brown, Sr. to the David Pollard, Jr. Fund, c/o Integrity Bank 6085 Allentown Blvd Harrisburg PA 17112.
As Pastor Bob would say, so he lived.   â€œBrown is a common name, but we are not common people.â€