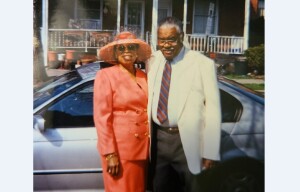 Esther M. Williams affectionately known as “Granny Mom/Aunt Esther of Harrisburg, PA went home to glory on July 4, 2021, at the age of 91, at Manor Care in Camp Hill, PA. Esther was born one of 6 children to the late Willie and Elsie Doswell of Meherrin, Virginia. Esther moved to Harrisburg in her early twenties, where she met and married Lloyd Williams, the love of her life. Lloyd & Esther relocated to Baltimore, Maryland for 10 years, returning to Harrisburg to unite with her family.

In her leisure, Esther enjoyed spending time with her family, cooking, shopping and traveling the world. She will be remembered most for being the matriarch of the family that always greeted you with open arms.  During her lifetime she had an unwavering faith in God, a member of Wesley AME Zion Church and later became a member of Goodwin Memorial Baptist Church.

To send flowers to the family or plant a tree in memory of Esther M. Williams, please visit our floral store.